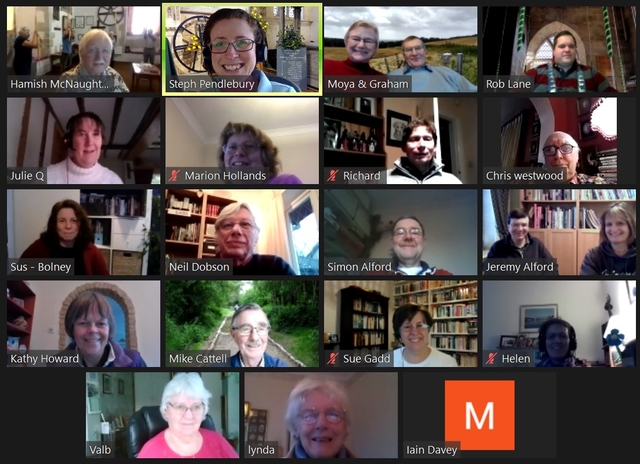 What a difference a year makes! In February 2020, we enjoyed ringing on the fabulous new Westley bells at Lindfield, followed by an excellent ringers’ tea and plenty of opportunity to chat with friends from across the District. And of course the meeting, which was almost a minor detail!

Sadly, the 2021 Annual District Meeting didn’t involve ringing on actual bells, or ringers’ tea (although I was impressed that some attendees had made valliant efforts to mark the occasion with cake), or seeing one another in-person. But we were able to meet online, have a chat, and hold a meeting to elect the District committee, nominate Association officers (to be elected at the AGM in May), and hear updates on District activities.

Twenty-three Association members joined the meeting, including a few from outside the District. A moment’s silence was held in respect for the following people who had passed away over the previous year: Tony Jones (Horsham), Peter Dewar (Coleman’s Hatch), John Howard (East Grinstead), Valarie Howard (Fairwarp), Betty Stoner (previously a member at Worth).

The following people had joined the Association in the last year, and were welcomed in their absence as new members: Karen Prowse (East Grinstead), Susan Spurling (Cowfold), William Martin-Lawrence (Hartfield), George Grant (Horsham), Richard Brock (West Hoathly). We look forward to welcoming them to the Association in person, and presenting membership certificates, once restrictions are lifted.

Reports on 2020 activities were made by myself as Secretary (which you can read here: Secretary's report) and by Simon Alford as BRF Rep (which you can read here: BRF report). I’d like to thank Simon, the committee members (Rosie Gregory, Chris Westwood, Susie Bowen, Richard Pendlebury), Ringing Master Elaine Farrow, and Newsletter Editor Katherine Potter, for all their hard work behind the scenes. Elaine has now stood down as Ringing Master and from the committee.

The following people were duly elected to the District Committee: Steph Pendlebury (Secretary; currently also Central Council Rep), Simon Alford (BRF Rep), Susie Bowen, Rosie Gregory, Richard Pendlebury, Chris Westwood (committee members). No nominations were received for Ringing Master, so this post is vacant – get in touch if you might be interested!

A discussion was had about possible events and practices that could be organised as restrictions are lifted; the following suggestions were made:

If anyone has any other ideas, or could help organise any of the above, please do get in touch with me via This email address is being protected from spambots. You need JavaScript enabled to view it. (my phone number is in the Handbook).
Finally, a representative from each tower was asked to provide a short update to the meeting about how ringers are keeping in touch, how many ringers they think will return once restrictions are lifted, and whether they would have a viable band or would need some support to resume ringing. Eight towers (out of 26) had no-one present to represent them, but of the remainder most were confident that they would have a viable band. A few towers will need support.

I would urge anyone who thinks their tower might need support (either to check over the bells before resuming ringing, for assistance with risk assessments, or for help with practices or training new recruits) to get in touch.

Many thanks to Rob Lane for chairing the meeting so efficiently. The full minutes are available here: https://www.scacr.org/resources/documents/meeting-minutes .