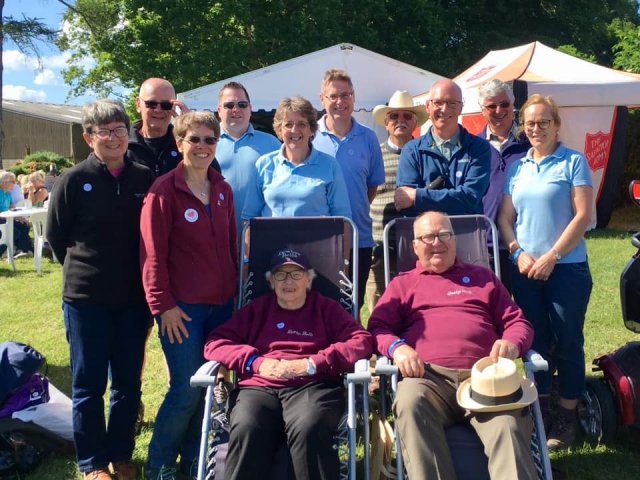 The proposal was received from Alison Everett, and below she has kindly written a supporting statement:

'Alan came to Sussex 18 years ago via Surrey, originally from Devon.

He has contributed a lot to ringing here, particularly through the establishment of the mini ring, Dewby Bells. This resource has been made freely available to ringers at Alan’s home, and has also been used extensively as a tool for raising the profile of ringing at a number of outside events. This has involved on Alan’s part a lot of hard work and effort which he has always contributed quietly and ungrudgingly. He built the mini-ring himself, and said he thought he knew a lot about bells before he started, but learned a lot more!

The first successful quarter peal on the mini ring was in December 2005. Since then over 1,000 quarters have been rung on them, which must be some kind of record over a mere 14 years!

Handbell Recovery is Alan’s handbell restoration business, he is to be found at both Association of Ringing Teachers (ART) and the Central Council’s AGM’s conferences and ringing roadshows. Earlier this year in February 2020 he held a handbell restoration and repair workshop covering the basic skills necessary to keep handbells in good order for the very reasonable price of £15 – which included a pastie lunch of course!

Each year Dewby Bells sponsors entry for a number of Association members to attend the annual ART Conference, with the money from quarter peals - Alan is keen to promote bellringing.

Mary Collings, Alan’s wife, sadly passed away in August 2019 she will be sorely missed. No-one could forget the look of glee on her face as she mastered the controls of a mobility scooter at the South of England Show last year! We understand Alan has generously offered to fund refurbishment of Hooe church bells including a new treble, in honour of Mary, he awaits the decision of the PCC.

Alan has 3 daughters and 7 grandchildren. He has a cat called Slider, who keeps him company at home, and he is keeping in touch with his extended family via Zoom.

For Alan to be elected as an Honorary Life Member he must receive a two thirds majority of votes cast online (or by paper for those who don't have internet access).

Another email, from me, giving details of the voting process and a link to the annual report will be sent out shortly.