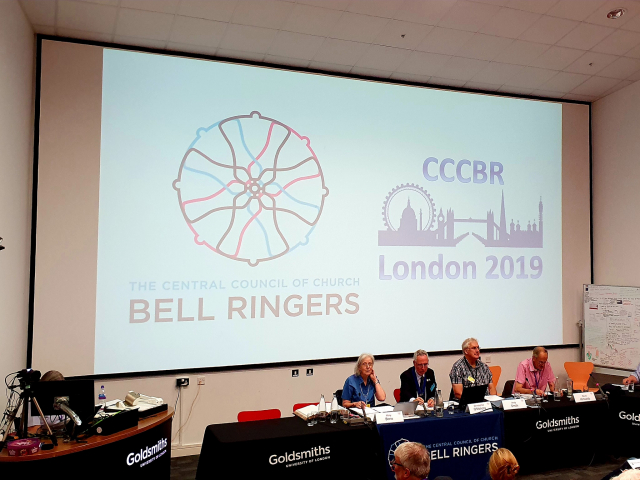 The Central Council of Church Bell Ringers (CCCBR) met in London 6-8th Sept 2019 for the 122nd Annual Meeting, the first in a revised format since the introduction of the Council Review Action Group (CRAG) CRAG reforms voted in unanimously by Council Representatives at the meeting last year in Lancaster.

Based at Goldsmith’s College, London, this was a relatively local meeting for the Sussex Reps, and an opportunity for ringers to participate and ring locally.

Friday ringing had been organised afternoon at several churches within the City of London, and at other towers around the capital where there is often not a full band. A tour of the belfry and ringing room at St Paul’s Cathedral was very popular.

A buffet supper was provided in the refectory at Goldsmith’s on Friday evening and immediately followed by a quiz, a good icebreaker and a chance to network with other council members and ringers who were attending, as it was open to all. Expertly led by Phil Barnes of the Kent Association, teams were named after famous ringers; the Sussex Reps being known as Team Carter. Ably assisted by a ringer from Hampshire and the two Scottish Reps we came a respectable joint third!

Under the previous AGM format over the late May bank holiday, Saturday was a day of social activities, with the main business of the Council being on Sunday. The meeting is now held the first weekend in September, with business conducted on Saturday and a mini roadshow for all ringers (not just CC members) on Sunday.

Saturday morning saw the newly created workgroups report back to Council members via a series of presentations. With these being held over two sessions it was possible to gain a good understanding of the work being carried out. Steph Pendlebury assisted Tim Hine in presenting the work of the Volunteer and Leadership workgroup.

The AGM of the Ringing World (RW) got comenced in the main lecture hall. Minutes from last year were adopted, company accounts revealed it to be in a relative position of safety – although much work is being undertaken to cut costs and increase readership.

Probably the most contentious item discussed this year was a change to the charitable objects of the Ringing World, removing references to the Church and the Christian Faith which constrain the Ringing World by causing it to be listed as a religious organisation by the Charity Commission, rather than one which has broader aims within bell ringing. Much discussion was had, and after a number of differing views had been aired, the motion passed with only a few hands raised against. The overriding message being that this change does not alter the relationship of bellringing with The Church. The outgoing chairman made an impassioned plea to for us all to work to strengthen this crucial relationship we have with our churches and clergy.

Nigel Orchard stood down as Chairman of the Ringing World after several years. He is succeeded by Canon David Grimwood of the Kent County Association. Trustees Bill Hibbert and Richard Smith also both retired by rotation, Richard Smith being eligible for re-election. After agreement for election by show of hands from the floor, Richard Smith, David Smith, Graham Lay and Doug Davis were elected as trustees.

Outgoing RW editor Robert Lewis was thanked for his hard work over the past 19 years, a presentation of an engraved handbell was made by the Board of Trustees.

After a brief adjournment for lunch, business moved on to the AGM of the Central Council. Given the changes voted in which heralded the commencement of the reform programme following the past two meetings, this was always going to be a relatively subdued affair. Council business is carried on during the year and opportunities to question, scrutinise and contribute to the direction of the CCCBR afforded to Council Reps and actively sought, throughout the year.

One notable opening note from Mary Bone, Secretary to the Council, was the high number of apologies for absence, and the number of Affiliated Societies who have vacancies for Central Council Representatives. All five Sussex Reps were present at the meetings and participated in the weekend activities, ensuring SCACR ringers were again fully represented.

The CC accounts showed a good financial position, there being over £400,000 held in account. Outgoing President Christopher O’Mahony reminded Council members that applications for project support were always welcome.

An update from the Workgroup leaders and the Executive followed. Much work has been carried out over the past 15 months, the Workgroups being formed from to take over and streamline the work previously carried out by the plethora of committees.

With the early resignation of Christopher O’Mahony from the role of President, nominations had been sought from within the ringing community to find a successor. Only one nomination had been forthcoming, this being Simon Linford, a ringer from Birmingham who seeks to make the Council ‘wake up and smell the coffee’. Simon in his supporting statement seeks to impart that ringing is not in as good shape as we’d like to believe and that there are serious issues to address. Simon is a man on a mission and seeks to support ringing at every level. He spoke to the meeting via a pre-recorded video message as he had a prior commitment supporting a ringing masterclass in Birmingham for those who had achieved level 5 of the Learning the Ropes scheme.

Alison Everett, a Sussex ringer from Bosham, was elected as a trustee of the Central Council and embarks on a three-year term of office. Within the Sussex Association Alison has injected huge amounts of enthusiasm in her role as Communications & Events Team Leader, I’m certain that she will do the same within the Council.

An outlook to the forthcoming year was presented, a feasibility study into the introduction of a direct access membership continues, this being part of the CRAG reforms.

Details of next year’s meeting were given by Pat Wheeler, which will be held at Nottingham University in the same format as this year, complete with mini roadshow to which all ringers are welcome to attend.

Thanks were given to Christopher O’Mahony for his hard work in helping to support the reform of the Central Council during his tenure as President, a bottle of wine being given as a token of appreciation by David Kirkcaldy, Deputy President.

A formal reception by the President of the Central Council, and dinner was held at Goldsmiths on Saturday evening. President elect Simon Linford had hurried down from Birmingham after his earlier commitments to be present at the dinner. During the speeches afterwards, the chain of office was passed from Christopher O’Mahony to Simon Linford.

Whilst some doubt the merit of holding a dinner, it is a good chance to network with other Council members. The seating plan is such that you are thrust onto a table of people that you may not know, but by the end of the evening will have shared stories with and discussed several points. Discussions were still ongoing late into the night with the incoming President, long after most others had retired for the night!

With the business of the Council having been carried out on Saturday a mini ringing roadshow was organised on Sunday.

The success of the Ringing Roadshow at Newbury in 2014, which attracted over 2,000 ringers, led to a suggestion of a regular annual event bringing ringing organisations, trade suppliers and ringers together in between major Roadshow festivals. The Central Council had devoted some funding to this year’s mini roadshow, in the hope of it being successful and used as a model for future events, held at the same location as the Council’s annual meeting.

To kick off the roadshow there was the opportunity to ring a both local towers, and those within the City for Sunday service

A programme of 21 speaker events brought together acknowledged experts from all parts of the ringing world including Bill Hibbert, Simon Linford, Lesley Belcher and Steve Coleman and covered subjects as diverse as the science of bell tuning, the story behind Ringing Remembers, and Project Pickled Egg.

Four training bells, including the recently constructed ‘Maypole Ring’ were located with the Professor Stuart Hall building. Sussex’s own John Norris demonstrating his successful training bell, along with those by Saxilby and Matthew Higby

There was the opportunity to witness a bell being ‘cast’ using a 3D printer, make a miniature bell rope at the Avon Ropes stand and talk to another Sussex ringer, Alan Collings, about the restoration of handbells.

The Central Council Rolls of Honour were available for viewing, Alan Regin being on hand to guide you through the pages which remember ringers who lost their lives in World War One. It was both a great privilege and very sobering to see ringers from Sussex illuminated in the book of remembrance.

Outside on the lawns, three mini rings were available for use including Dewby’s Bells from Sussex. These proved very popular during the day and some good ringing was to be heard.