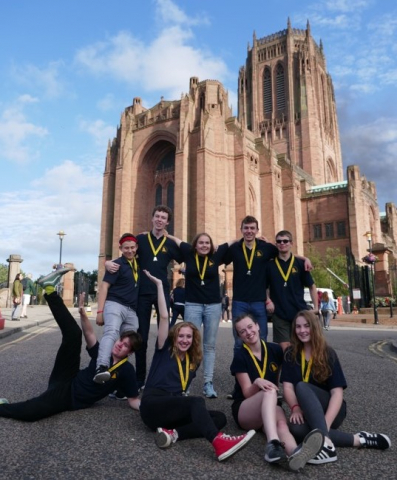 I can safely report the Ringing World National Youth Contest trophy has safely made it to Liverpool and been handed to the new RWNYC champions, Oxford. Sadly we couldn’t defend our title this year, and settled with a commendable 6th place. We stepped up this year and rang Grandsire Triples, making us one of only a few teams to ring a method out of the 24 competing teams.

We ventured up to Liverpool by train on Friday 5th and stayed two nights in a hotel over the whole weekend. The Friday night saw some of us head over to St Nicholas Pierhead for their weekly 12-bell practice, while others stayed at the Hotel for dinner. On Saturday we were lucky to be drawn to ring third, meaning we could spend the rest of the day tower grabbing in Liverpool! The competition tower was St Francis Xavier’s; a beautiful Roman Catholic Church. We found the bells challenging, with some interesting acoustics, but our hard work and preparation meant we could produce some top striking on these bells. Our feedback from the judges after the results in the evening commended our solid speed and purpose, with small striking mistakes not detracting from the overall quality.

The rest of Saturday saw us grabbing towers around Liverpool such as the 8s at Penny Lane and Bootle. We also got another chance to ring at Pierhead, an absolutely fantastic 12. It was great to ring Grandsire cinques at Pierhead and show other teams our 12-bell skills. Some older ringers doubt the skills of young ringers, but in Sussex we pride ourselves on being able to ring a variety of methods from 6 to 12 bells, and do it with confidence and skill. 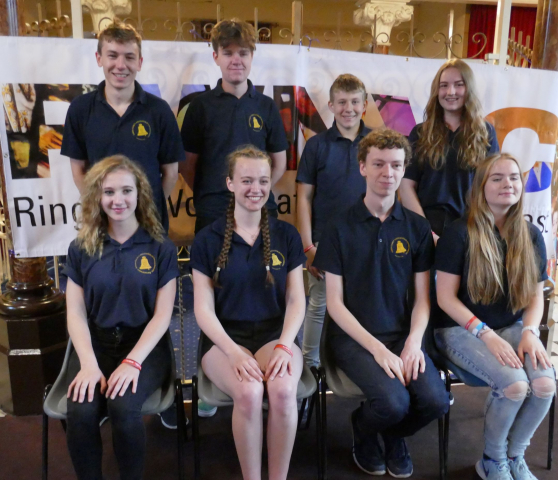 The highlight for many was the chance to ring at Liverpool Cathedral after the competition results were announced. The Cathedral bells are the heaviest and highest in the world – It was a long way up! The experience of ringing these massive bells inside a huge ringing chamber, surrounded by 100s of young ringers, adults and friends, was astonishing.

The final result was a little disappointing, but we knew we gave it out all, and had done Sussex proud. We will be back next year (location tbc) to compete again and build on our ringing this year.

Thanks to our coordinators, Anne and Sandra, and our supporters over the weekend. It was a blast!